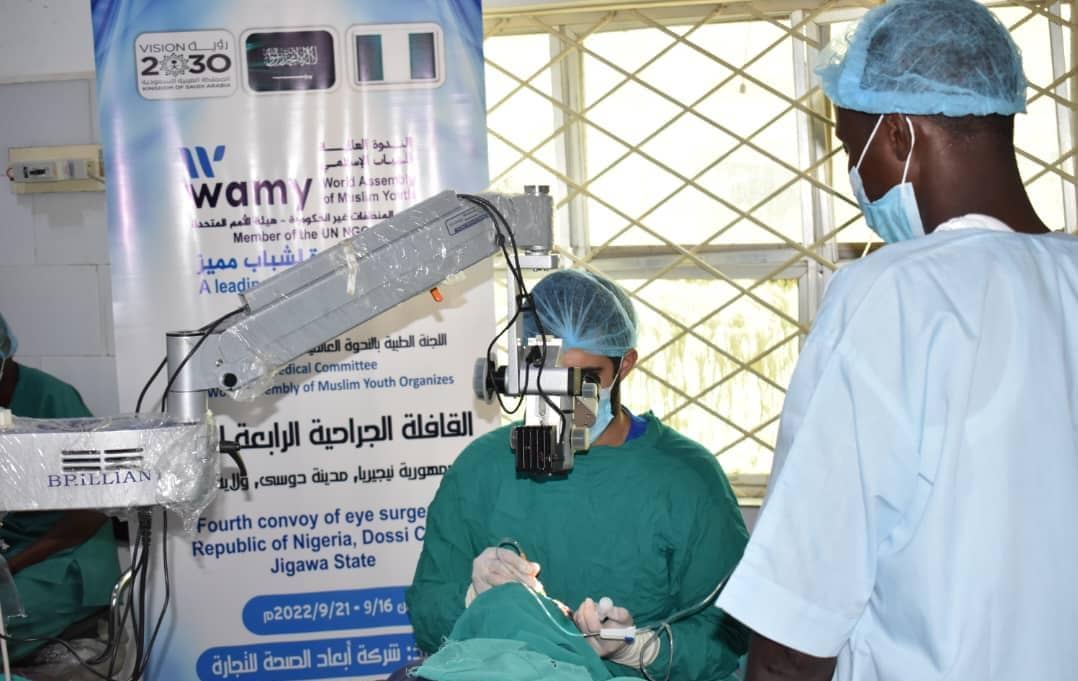 More than 2,730 persons have benefitted from free eye services and cataract surgery financed by the World Assembly of Muslim Youth (WAMY) in collaboration with Mallam Inuwa Foundation (MIF) in Jigawa State.

MIF Head of Management, Dr Husseini Yusuf Baban said surgical procedures were conducted on 636 patients; 600 others received glasses while 1,500 got a variety of drugs.

Baban explained that the annual week-long outreach, supported by the state government, was necessitated by the need to reduce the burden of blindness in several Jigawa localities.

“The motivation is purely to assist vulnerable communities and persons who lack the wherewithal to perform/undergo necessary eye surgeries. We are doing this solely to seek reward from Almighty God”, he noted.

WAMY distributed medicated glasses and drugs for various eye ailments to the patients at the Dutse General Hospital at no cost.

Head of the Foundation in Nigeria, Dr Isham Muhammad, and Chief Medical Doctor for the exercise, Dr Bihlali Abdallah expressed excitement over the reception in Jigawa and successes of the intervention.

Speaking on behalf of the beneficiaries, Alhaji Audu Ali Warwade conveyed heartfelt gratitude to the organizers of the yearly medical aid.

He applauded the charity organizations for their support which has helped to cure the cataract and other eye problems that hitherto affected their sight.

The community-based MIF – facilitated by the family of Kashifu Inuwa, Director General of the National Information Technology Development Agency (NITDA) – was set up to improve the lives of Jigawa people.

The body founded in 2018 has provided potable water and free eye services to thousands in Dutse, Gumel and Hadejia emirates, in conjuction with Qatar Charity Foundation.

WAMY Foundation, established in 1972 in Riyadh, Saudi Arabia, was founded by Muslim Brotherhood member Kamal Helwabi, who served as its executive director until 1982. It has offices in countries with significant Muslim populations.

Thanks to NYSC, Eunice & Ebuka are Set For The Aisle! #DoseofEE